The Splendor of the Sky Disk from Nebra

On the way to my old hometown in Saxony-Anhalt I read at the main station of Halle(Saale) about a new museum in Nebra with its famous sky disk and decided to visit it as soon as possible,

although I read there also that the genuine disk is being presented in the National Museum of Prehistory in Halle(Saale) (there, however one can see it again only from 23rd May, 2008). So what could I expect? Above the Unstrut valley, I saw then behind Wangen, a district of Nebra, a golden building with a kink floating like the golden curves on the sky disk. It's name: Arche Nebra. Full of excitement I entered the building. There I heard first that there's also a planetarium in it, which despite the weekday was unfortunately booked out. I was simply too late because of my preceded visit to the imposing Querfurt castle (see below). Ignoring the inviting cafeteria I got to the 1st floor and couldn't hide my astonishment. A multimedia show according to the latest technology displayed "Experience the sky disc" and in addition data and pictures of the development of astronomy. I found particularly interesting the fact, that at the other end of the Saale-Unstrut valley, in Goseck, there's the oldest reconstructed solar observatory of the world. Stone Age and Bronze Age meet here on the restricted space with impressive early superior cultural certificates. 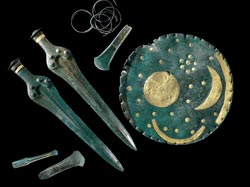 The lavish stage-managing of Nebra Ark acquaints its visitors not only with the secrets of 3600 old Bronze disk from the early Bronze Age, but also with the world-view of the Bronze Age people. And so the disk served not only to determine summer and winter solstice, but with the help of the star image of the Pleiades in connection with the new moon (or rather after 2nd possible counting 3 days after this one, to what the thickness of the crescent moon points out) and originally 32 stars also to synchronize lunar and solar year, what's important to agriculture (besides 33 lunar years correspond to 32 solar years). Then a full moon in the spring month regarded as a beginning of the new year. This elitist knowledge got most probably sometime lost and the ritual purpose of the impressive disk predominated over it, what are indicating the holes on the edge of the disk, with which it had been probably mounted on a rack and perhaps been carried around. Also the "sun boat" has been added later, an idea from Mediterranean area of the transport of the sun in the sky ocean from a place of the sunset to sunrise around the Earth disk (more here).

I would have liked to immerse myself deeper in this

stage-managing and also to try to find out, what the lively voice projected from behind a lot of the exhibits wants to share with us and what the 'Kasperl' (buffoon) in the puppet theater is saying to children, as the news reached me, that a shuttle bus brings visitors to the place where the sky disk was found, which is marked by a 30 m high tower, in a longitudinal axis of the Ark. After approx. 2,5 km it was meant to get off and to go on the Mittelberg. The forest on its peak had been cleared and soil criminally and archeological meticulously examined. The tower is divided not only so, that the sunlight falling through the fissure shows summer solstice, but like the needle of a sundial is inclined towards the place where the disk was found, which is marked by a big polished slab. View axis placed in the stone to the point of summer solstice points at the chunk in the "Brocken" of Harz Mountains, which one can recognize on the horizon in a clear view. It was amazing to me how many vertigo free and joyfully climbing people are still there, ready to climb up leaning towers. But some of them for sure reach their limits.

I hope, I will have once again the opportunity to visit this beautiful land with its Nebra Ark. The sky disk and the other outstanding findings spread a splendour of old culture, that stretches beyond the Saale Unstrut valley. If then one still knows, that in only approx. 40 km away located Bilzingsleben, connected through the Romanic Road, are investigated since 1969 by University of Jena the species facts of a developed homo erectus, who lived there approx. 400 000 years ago, then one realizes big historical meaning of this countryside for the development of the humanity. And just next-doors one can find the traces of early German emperors' history - in the remains of the located close to Nebra Memleben Monastery (death place of King Heinrich I and Emperor Otto II) and the Kaiserpfalz (Imperial Palace) on the Kyffhäuser. But of course one should on no account fail to enjoy also the good Saale-Unstrut wine.

Here I would like to once again point out to the situated approx. 10 km to the north of Nebra Querfurt castle (picture inside the castle) - "as a one of the biggest and best preserved medieval castles in the European area" with its massive bastions (picture) and wonderfully equipped in a baroque style Romanesque Church with the ground plan in shape of a cross (picture), which reminds on southeast European models.

back to the head
to the index